D. Ray Smith Carolyn Krause brings us insight into Bonnie Carroll, a most successful business owner, longtime supporter of Oak Ridge charitable organizations, and a good friend. I am pleased to bring this information to you through Carolyn’s research and the talk Bonnie made to the Friends of Oak Ridge […]

Carolyn Krause brings us insight into Bonnie Carroll, a most successful business owner, longtime supporter of Oak Ridge charitable organizations, and a good friend. I am pleased to bring this information to you through Carolyn’s research and the talk Bonnie made to the Friends of Oak Ridge National Laboratory. This “Historically Speaking” series will have two parts, first a more personal look at Bonnie and her company, Information International Associates, and the second, a broader look at the world of information and her involvement in it.

One of the lesser-known legacies of Alvin Weinberg was one of the Oak Ridge-Knoxville region’s most successful female-launched and owned businesses — the former Information International Associates (IIa). He also left a long legacy at Oak Ridge National Laboratory in scientific data science and management.

In the early 1960s, ORNL Director Alvin Weinberg was asked by President Kennedy to chair a special President’s Science Advisory Committee Panel on Science Information to look at the growing information challenge. The result of this study was the famous Weinberg Report of 1963 titled “Science, Government, and Information: The responsibilities of the technical community and the government in the transfer of information.”

One of the avid readers of the report was Bonnie Carroll, founder of IIa. She had perused it while working on a master’s degree in library science from Columbia University in New York City, where she was born and raised. In 1971, she was hired as a librarian by ORNL, where she met Weinberg, an avid user of the library.

“The Weinberg Report helped focus me on scientific information,” she said in a recent talk to Friends of ORNL. She explained that it addressed the problem of retrieving and communicating the rapidly increasing amount of scientific and technical information (STI) of varying quality.

After her stint in the ORNL library, she joined the newly established Environmental Information Systems Office and then Weinberg’s planning group. Eventually, she was named coordinator of ORNL’s 24 information centers, which were established in response to the Weinberg Report’s recommendations. Their staffs collected, analyzed, and synthesized data on, for example, the abilities of different materials to resist cracking, protect you against radiation damage, or increase your risk of getting cancer. Some of these centers still exist.

Her early conversations with Weinberg, Carroll said, “launched my direction in Oak Ridge. My company was a spinoff from the foundation ORNL gave me that influenced my thinking on scientific and technical information.”

So why did she leave the lab at age 30 to work alternately for the private sector and government?

“As a woman and non-Ph.D. library scientist, there was no place for me to go at ORNL,” she explained. She obtained a job in the private sector for the Franklin Research Center. “That exposed me to the industry of which IIa became a part,” she said.

After seven years, she left OSTI and returned to the private sector to another government contracting company that was a minority 8(A) firm.

“There I learned the tools of management for a government contracting company,” she said. “Why did I leave there? Honestly, they closed their Oak Ridge office and I had nowhere to go!”

For a September 2018 article by Tom Ballard for Teknovation.biz, she said that her original “goal was not to be an entrepreneur. The company I was working for left town. I started consulting and my clients needed more people, so I had to hire staff.”

Carroll founded IIa in 1988 in Oak Ridge at the age of 40. During her 30 years as chief executive officer for IIa, the company grew to more than 250 information managers and scientists, technology systems designers, developers, mission specialists and security professionals who lived in Oak Ridge, Maryland, Ohio, Virginia, Germany, and the United Kingdom. A second office was established later in Washington, D.C. The company was sold in 2018, and many of its employees now work for Keylogic Systems, LLC, an integrated partner company founded in Morgantown, W.Va.

Carroll attributed some of her success to male mentors — Weinberg, Bob Livingston, Larry Peck and Bob Van Hook — and to the opportunities she had to work on White House committees. She was also elected president of the American Society for Information Science (ASIS) in 1985.

“It was said by a notorious CEO of Chemical Abstracts that being the president of ASIS was worth $10 million,” she said. “It was very true. It allowed me to jump hierarchies and associate with leaders I would not otherwise have had a chance to meet.”

The largest of IIa’s 18 government customers were the U.S. Department of Energy, Nuclear Regulatory Commission (NRC), Department of Defense (including several Air Force bases), National Nuclear Security Administration and ORNL, as well as the Patent and Trademark Office (PTO).

“Because we wanted to confirm our shift from our public image as a manager of libraries for Air Force bases to our evolution as an information technology (IT) company and because we wanted to bid on bigger IT contracts, we acquired a company that did IT work for NRC,” she said. “The biggest change came when we won a major IT contract with the PTO, almost doubling the size of IIa.

“Our company drove meaningful advances in its customers’ information management capabilities through innovative application of technologies and deep subject matter knowledge of customers’ environments. We were proud that our work had impacts in national defense, intelligence, homeland security, nuclear research, national disasters, and STEM education. People wanted to work for us because our core value was integrity in a tough business environment. We were very proud of that.”

‘Write a eulogy, not a resume!’

Carroll said that many women have asked her how to become a successful entrepreneur.

“I advise them that before you can answer the question of how to become a successful entrepreneur, you need to ask yourself what your goals are. Do you want to be rich or famous, or leave a legacy? Do you just want to be your own boss, the hardest boss you will ever have? Do you want to sell a technical service or a patented product? What is your passion? What is your exit strategy? Write a eulogy, not a resume!”

What lessons has she learned since founding the company? Here are some of her answers. The business world has changed because there are many more opportunities for women and many more women role models.

Technical people who start companies should employ experts in accounting and finance.

“You can be wildly profitable and go out of business because of cash flow problems — that is, you don’t have enough cash to pay your staff and your bills,” she said. “I began to understand why chief financial officers rather than chief technical officers become CEOs.”

Another lesson, she added, is that the CEO should let go and not try to do everything.

“You should hire people smarter than yourself. You should realize that you are the conductor, but you don’t play the instruments.”

Carroll said the worst thing about having your own business is when you must make decisions about other people’s livelihoods, such as laying them off.

“The best thing about having your own business is the ability you have to make your own decisions, weigh the risks, and take the upside consequences. She has enjoyed “making a positive contribution to the community and nation, seeing the world and receiving recognition for her efforts.”

After retiring the first time, Carroll became the interim executive director of the World Data System International Program Office, the worldwide consortium of data systems around the world, which she helped bring to the Oak Ridge Innovation Institute, a joint venture between ORNL and the University of Tennessee at Knoxville.

She retired the second time when a full-time executive director was found. Now she continues to work hard, but it’s mainly pro bono for the science organizations and charities she loves.

Alvin Weinberg would be proud.

Thank you, Carolyn, for a thorough look at one of our most successful business owners. Bonnie has not only had a great business career, but she has also supported numerous charitable organizations in major ways. I have had the pleasure of serving on boards and committees where she is always among the most effective members and is most generous with her support.

Sun Aug 21 , 2022
Ascend in the occurrence of signs for anticoagulant treatment is central point driving the market development during the figure time frame. Anticoagulant treatments are utilized for particular type signs incorporating atrial fibrillation, coronary conduit illness, profound vein apoplexy, ischemic stroke, and pneumonic embolism among others. For example, in the year […] 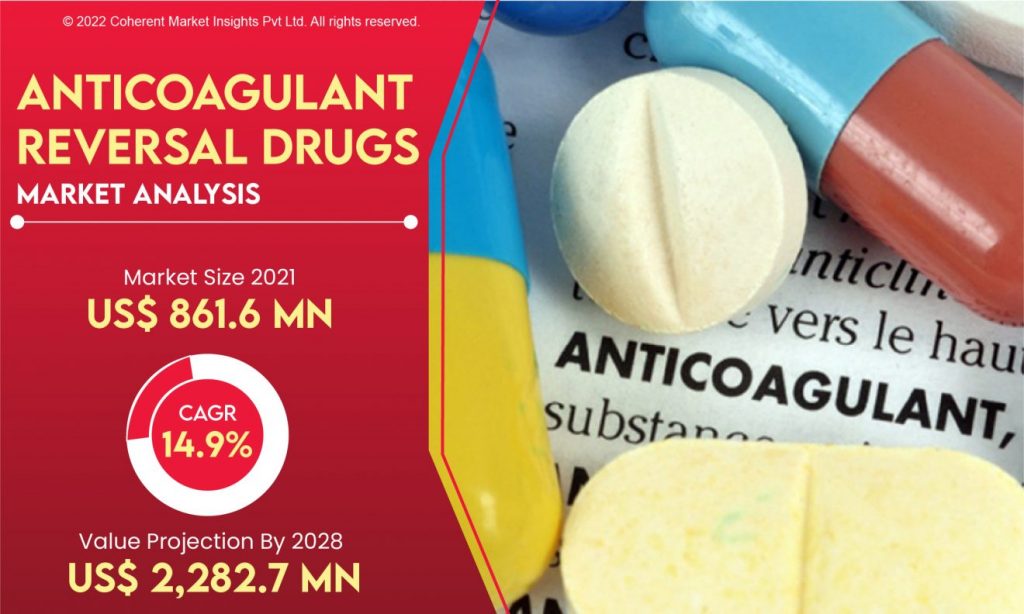