More than 500 people packed Auckland’s Aotea Centre, eager to hear from a who’s who in the climate world.
Photo: Supplied

A sold out climate and business conference in Auckland has heard fears for the future expressed alongside optimism for business opportunities.

More than 500 people packed the Aotea Centre, with extras forced to stand and others watching from a screen in the foyer, eager to hear from a who’s who in the climate world.

Business, political and climate policy leaders descended on Tāmaki Makaurau for two days of talks about how businesses can slash emissions and adapt to a dangerously warming world.

A key thread was the massive opportunities offshore for exporters with low-emission strategies and products.

“Unilever, owner of 400 brands globally, has put out a report recently to say that their sustainable living brands, brands that prioritise the environment at the core, are growing twice as fast as their other brands.”

Māori businesses were the gold standard internationally with their emphasis on the connection between people and the environment, she said.

“It opens the scope of possibility … the climate crisis doesn’t have to be a crisis; it can be a sea of opportunity and that’s what we are seeing.”

A huge amount of new government climate policy has landed this year, and there has also been a massive ramping up in private sector investment and innovation in sectors like renewable energy.

It has left attendees with lots to discuss.

Energy policy consultant Christina Hood from Compass Climate said the chats on the sidelines were an important feature of the event.

“You learn a lot about what’s going on behind the scenes. There’s a few speakers at the front of the room but there’s five hundred people here in a room all doing things in their different ways.”

“The biggest thing I came here for is to understand what are the movers and shakers, or the people with power, doing.

“Everyone’s waiting for people to make a move and there are big moves happening but it’s like, we’ve got a lot of chat and we need … to start actually doing stuff – ‘less hui more do-ee’.”

Political parties also turned out with Labour, the Greens and National reconfirming their commitment to climate laws and international obligations.

The sole dissenter was ACT’s Simon Court – which could cause headaches for any National-ACT coalition agreement.

ACT MP Simon Court, standing, was out of step with those from other political parties.
Photo: RNZ

It could also torpedo the political consensus which provides the stability businesses need to make decisions.

“In the first hundred days we will get rid of the Zero Carbon Act and we would expect that our support partner in a coalition to support us with that.”

But it was the Green Party’s Julie Anne Genter’s call for increased government action which garnered spontaneous applause from the crowd.

She choked up when describing what would happen if the world failed to act.

“Well, then, we’re giving up the game and my children don’t have a future. That is the truth.

“Our children, they’re relying on us to do the responsible thing and to take action now on climate change. We can’t control what others do but we can control what we do here and we can do the right thing.

“I know New Zealanders are up for that.”

It was a strong call to turn words into action.

Fri Sep 23 , 2022
New York state Attorney General Letitia James on Wednesday announced she is suing former President Donald Trump and three of his children for fraud stemming from her long-running civil investigation into the Trump Organization’s business dealings. “I am announcing today that we are filing a lawsuit against Donald Trump for […] 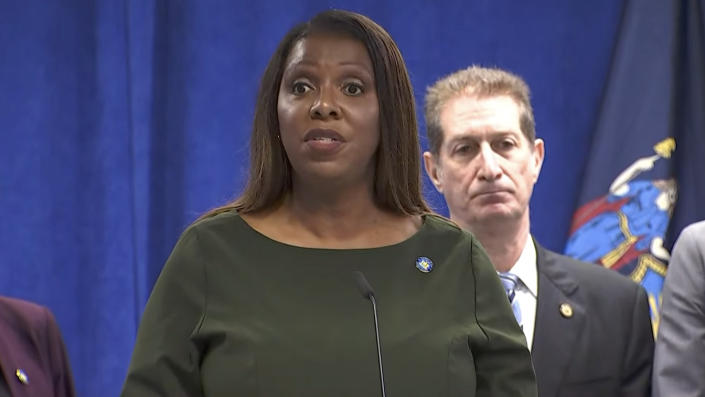