click to enlarge Luke Awtry Beer, poutine and a burger at Maudite Poutine At 156 North Winooski Avenue in Burlington, two signs hang above a restaurant door. One […] 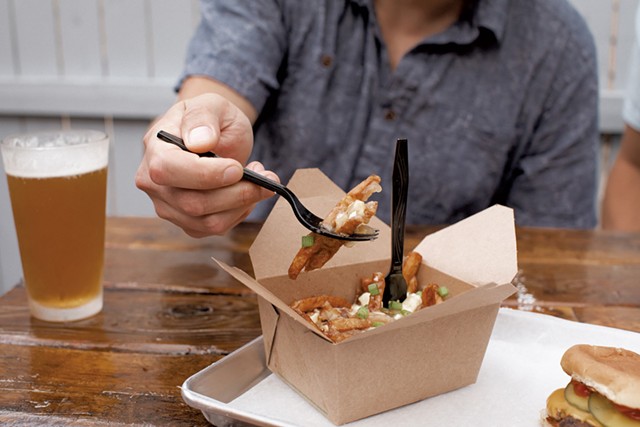 At 156 North Winooski Avenue in Burlington, two signs hang above a restaurant door. One advertises Maudite Poutine, an expanded brick-and-mortar version of the well-loved fries-and-gravy food cart. The other, for Tiny Community Kitchen, is colorfully illustrated with storefronts and kitchen equipment but offers no further explanation.

Curious passersby who look in the window will find a calendar indicating how the space inside is shared. Maudite Poutine is open Thursdays through Saturdays. Barbara Jean’s Southern Kitchen occupies the space on most Sundays and Mondays, while midweek evenings over the past month have offered Iraqi or Bosnian cuisine or an oyster night.

Above the calendar, a poster explains that Tiny Community Kitchen is “a collaborative effort … aimed at making a licensed commercial kitchen and restaurant space accessible to small food businesses.” 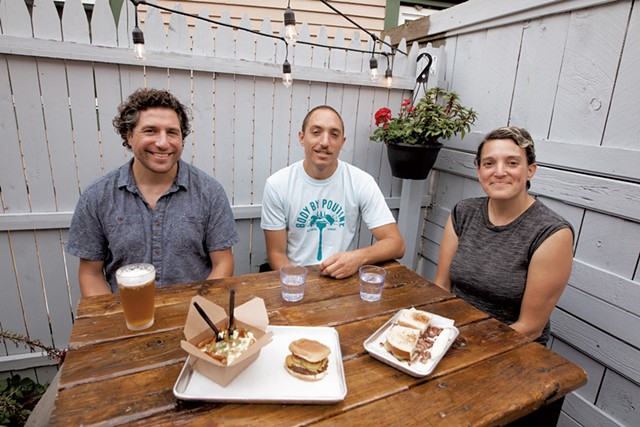 The many facets of this Old North End enterprise emerged from the personal experience of Joe, Leah and Michael Collier, the siblings behind Maudite Poutine, which holds the restaurant lease. They run a venue where Burlington-area diners can sample a variety of cuisines, many of which are not regularly available elsewhere in the area.

For some participating cooks, Tiny Community Kitchen may be a stepping stone to their own restaurant; for others, it’s a side hustle or a way to share their food and culture. For all, it provides the kind of flexible kitchen space sought by many aspiring culinary entrepreneurs.

In 2016, when Joe and Michael started their poutine cart on Church Street, they relied on the kitchen at Burlington’s Manhattan Pizza & Pub.

Michael, 43, explained that unpredictable weather and staffing made it too expensive for the fledgling business to commit to renting a commercial kitchen for ingredient prep.

Joe, 36, had worked as a bartender for several years at Manhattan Pizza & Pub, which is co-owned by a longtime friend. “Without their basement, we would never have made it,” he said.

Leah, 38, moved to Burlington to join her brothers in late 2018, and they built a successful fleet of three Maudite Poutine carts. On Church Street and at events, their team serves up classic and creative takes on hand-cut fries with Bridport Creamery cheese curds and gravy made with local chicken. 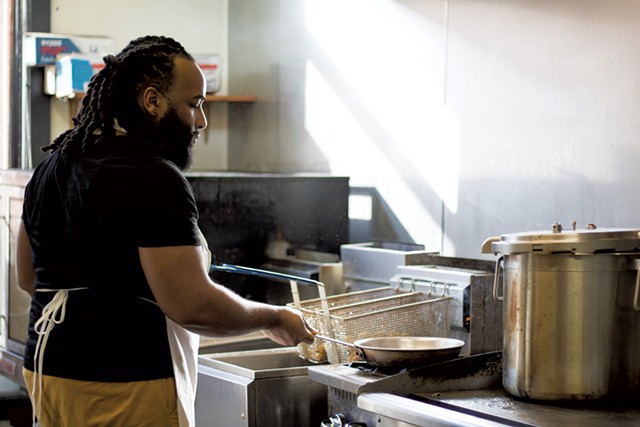 For a while, Maudite Poutine prepped and served its menu at Orlando’s bar and lounge in Burlington, but in 2019, Maudite’s prep landed back in Manhattan Pizza & Pub’s basement.

In 2021, the Colliers heard about the Old North End restaurant left vacant by the closure of Drifters. They were eager finally to have their own kitchen and restaurant to host a poutine-forward menu.

The new restaurant, which opened in May, serves varieties of poutine such as Montréal Smoked ($12), crowned with house-cured and -smoked brisket, and 34 Degrees North ($12), topped with herbed chicken or steak, roasted pepper sauce, tzatziki, and feta. The top-notch brisket is also served on the Smoky Joe burger ($8) and in a mustard-lashed smoked meat sandwich ($14).

The Colliers knew they’d be too busy with their thriving mobile business to be full-time restaurateurs. They also wanted to pay back the crucial help they had received.

“We’d always been the ones sharing other people’s space,” Leah said. “It’s really hard to start in the food industry if you’re a tiny business, especially if English is not your first language.” 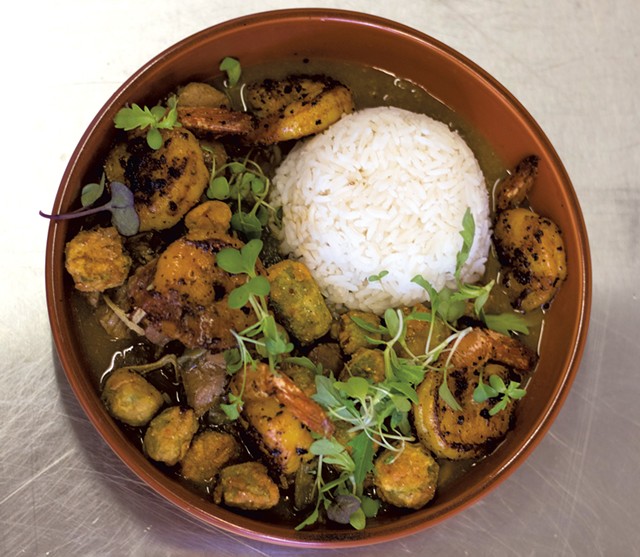 So Tiny Community Kitchen was born. Will Clavelle, business development projects and policy specialist at Burlington’s Community & Economic Development Office, played a key role in its establishment. He helped the Colliers to secure $15,000 in federal grant funding for needed renovations and to sort through the thicket of health inspection, liquor licensing and liability requirements for multiple businesses operating in the same space.

Clavelle also connected the Colliers with people who could use the kitchen, such as French-trained chef and St. Louis native Marcus Stittum of Barbara Jean’s Southern Kitchen and Sabah Abbas of Sabah’s House, an accomplished home cook who arrived with her family in Vermont in 2014 as a refugee from the Iraq War.

“Will knows everybody. When he got on board, we all got excited because he was so excited,” Leah said.

Clavelle said he appreciates the Colliers for “coming into the neighborhood with a great community mindset” and showing their commitment to supporting other food entrepreneurs. Leah puts in a lot of work to coordinate the rotating calendar of cooks, he noted.

For customers, that rotation might mean walking in one night to order Stittum’s soul food classics, such as shatteringly crisp, buttermilk-brined fried chicken ($13 to $16.50) or a deeply flavored gumbo with sausage and butter-soft shreds of chicken ($21.50). They can enjoy those with a tall hurricane cocktail ($15) in the small dining room, plant-filled back patio or newly constructed parklet in front of the restaurant.

Another evening, customers might pick up takeout orders of Abbas’ spice-rich rice and noodle pilaf served with two crunchy, veggie-filled sambusas and fruity, slow-cooked eggplant and peppers or a caramelized chicken thigh ($18 to $20).

The next night, Joe Collier is in the kitchen turning out Maudite’s expansive menu of poutines and pub fare for diners who generally eat on-site and dig in with a beer, cider or canned cocktail.

Any potential confusion about the ever-shifting cast of restaurant characters is outweighed by the array of delicious food on offer.

Tiny Community Kitchen has enabled Stittum, 33, to share the flavors of his heritage and test customer interest in Barbara Jean’s Southern Kitchen.

“I just saw there was nothing like it in Vermont,” he said. “This is something that I grew up with. It’s really in me.”

Stittum was the project’s first participant and is now the most frequent. Equipped with an MBA and a culinary degree from Ferrandi Paris, the French School of Culinary Arts and Hospitality Management, he wasn’t sure what he’d find to do when he moved to Vermont in spring 2020 for his wife’s job. He has worked as a private chef and teaches cooking classes at the Essex.

Barbara Jean’s is named for his grandmother, at whose side he learned to cook, especially during holidays. “I had a big family — 42 first cousins,” Stittum said. 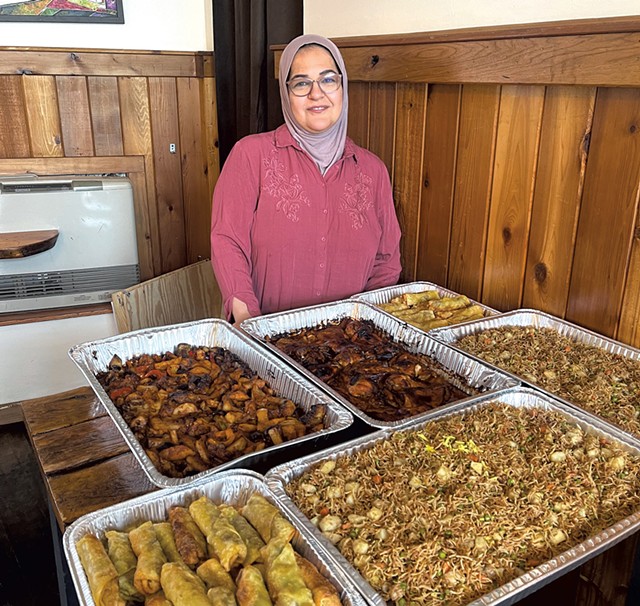 Jessica Anderson of Burlington said she’d heard about it from her hair salon clients. “I grew up in Liberia, and I like food with a lot of flavor, spice and seasoning,” she said as she waited for her order. “It sounded like something we need in Vermont.”

Later that evening in an audio message, Anderson said she had loved her food. “It made me feel like you’re at a picnic gathering with family and friends enjoying a meal together.”

While the food was a little pricey, Anderson said she wants to support fellow Black businesspeople and is excited to find Southern food in Burlington. “You’re paying to have that Black culture experience through your mouth,” she said.

Word of mouth also brought Andrew Mitchell of Burlington and two friends to Barbara Jean’s that night seeking “real Southern-style buttermilk fried chicken,” Mitchell said. “If this lives up to my expectations, I might be here a lot.”

Later, by text, Mitchell said the meal had exceeded his expectations. The chicken, he detailed, “was crispy, juicy, and perfectly seasoned,” and sides of black-eyed peas, mac and cheese, and candied yams were “great.”

Mitchell added that he and his friends liked the idea of the restaurant hosting different cooks. “We were chatting about the Bosnian cuisine and are interested to check that out, too,” he wrote.

Besides Stittum, Tiny Community Kitchen participants so far include Mediha Goretic of Meza Bosnian Cuisine; Said Bulle of Jilib Jiblets, known for his Somali-style fried chicken; and Nazanin Bedreddin, the Healer Chef, who makes Middle Eastern food. School Street Kitchen has done an oyster pop-up, and the Casa Birria team uses the space to prep for its mobile operation.

Leah said she has had preliminary conversations with cooks of Tibetan, Indian and Korean Filipino food. “We want to keep the mix going,” she said.

The Colliers charge a flat fee by the hour or the day, and Leah publicizes the schedule via Tiny Community Kitchen’s Instagram.

The mother of six said she’s known around her Intervale Avenue neighborhood for her cooking. “If I hear someone is sick or has COVID, I just leave some food,” Abbas said. “It’s my way to say, ‘Hi. We are together. We are sharing everything.'”

But Abbas hadn’t thought of selling her food until she cooked for a local event last year. Tiny Community Kitchen “gives me that opportunity with no stress, less risk,” she said.

Every time Abbas blends the spices for her menu and carefully selects only the smallest eggplant for the jars of addictively delicious oil-cured, red pepper-stuffed eggplant ($8) that she stocks in the Tiny Community Kitchen cooler, she said, “I try to share my culture, too.”

For the Colliers, that’s an important goal.

“I would like this to be a robust hub for the community to try new foods and meet new people,” Joe said.

“Selfishly, as a resident of the Old North End,” Michael added, “I like the idea of having different cuisines here. Like, ‘It’s Wednesday, let’s go down to Tiny Community Kitchen and see what they have.'”

Thu Sep 1 , 2022
Options provide the buyer with the opportunity, but not the obligation, to purchase or sell an underlying asset at a specified price during a defined period. There are various trading options methods, and in this article, we will explore six of the most commonly used methods in Hong Kong. For […]