Long before oversized, cartoon-inspired balloons reigned supreme over American televisions on Thanksgiving day, Rowland Hussey Macy was hawking dry goods to New Englanders and Californians in the mid-nineteenth century. Though the founder of the modern-day Macy’s department stores couldn’t seem to spin gold from the prospecting 49ers, he did produce […]

Though the founder of the modern-day Macy’s department stores couldn’t seem to spin gold from the prospecting 49ers, he did produce an East Coast hit when he launched New York City’s first department store in 1858.

R. H. Macy was a merchant by trade who descended from one of the seven founding families of Nantucket. Legend has it the iconic red star store logo was borrowed from a tattoo on his arm — a remnant of his early days aboard a whaler ship.

The department store grew during and after the Civil War and would eventually become a chain by the end of the nineteenth century. Macy’s moved into its flagship Herald Square location in 1902, which became the largest single store in America.

Always on the hunt for publicity, R. H. Macy devised store policies, promotions, and outright gimmicks to gin up traffic and sales. Macy’s offered one of the first iron-clad, money-back guarantees, trotted out Santa Claus each year at Christmas, and featured celebrity visits and product demonstrations at many of its signature locations over the years.

Although the first Macy’s parade was a small affair held in Massachusetts on July 4, 1854, New Yorkers gathered street-side for a much larger celebration on Thanksgiving Day 70 years later, in 1924. Felix the Cat and other balloon ambassadors would not join the festivities until later on in the Roaring Twenties.

Fast-forward a few decades, and we enter the modern era of financial leverage which blossomed in the 1980s.

Federated converted many of its subsequently-acquired store brands — such as Marshall Field’s, Kaufmann’s, Filene’s — to Macy’s. These name changes were controversial, as nostalgia overwhelmed the sweeping technological changes coming to retail.

In 2007, Macy’s finally reclaimed the corporate moniker once again.

In the intervening decade-and-a-half, many department stores have struggled to adapt during the digital transformation. But Macy’s still operates 725 stores in the U.S. — largely under the Macy’s and Bloomingdale’s names.

Jared Blikre is a reporter focused on the markets on Yahoo Finance Live. Follow him @SPYJared.

Sun Sep 25 , 2022
George Naylor holds an organic apple grown on his farm, Tuesday near Churdan, Iowa. Naylor, along with his wife Patti, began the transition to organic crops in 2014. The demand for organics has increased so fast that the U.S. Department of Agriculture last month committed up to […] 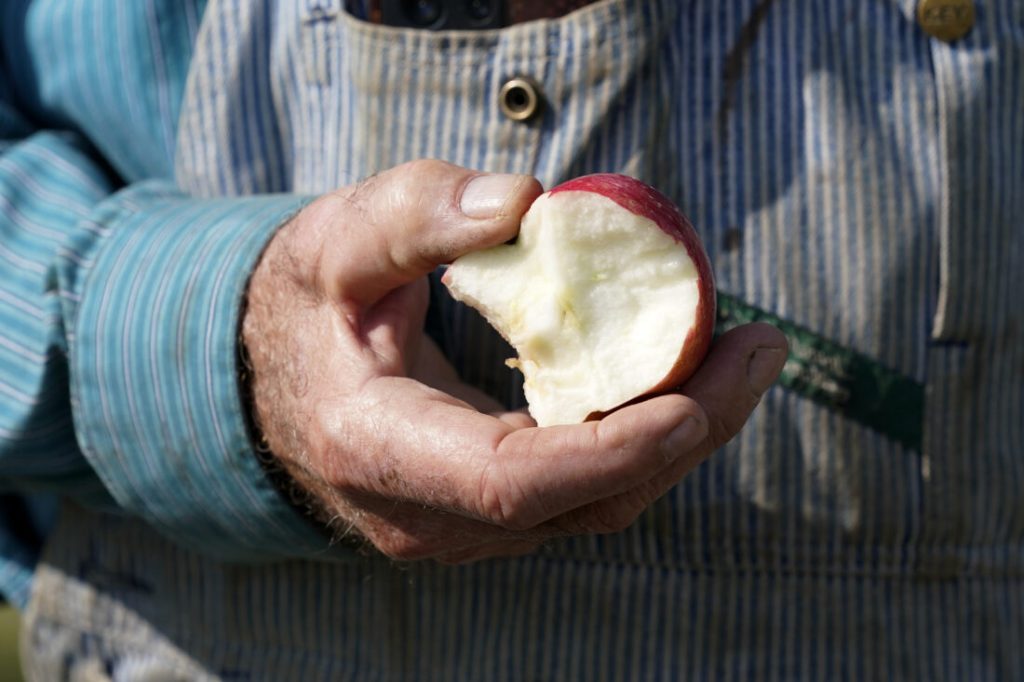